Jesse is from the litter of Bichons we rescued from a breeder in PA. Shortly after we rescued them in 2008 Rosalind adopted Jesse and well she has been happy everyday from day one! He was about 3 months when he was rescued and he is already 17 months now!!! Wow!! A little bit about Jesse below is what his fur-mommy Rosalind sent us!


Everyone loves him....he is a non-registered "therapy dog" as I am a psychotherapist and he comes to work with me all the time. He is in one lap after another all day. People see him from across the street and point b/c he is so friggin CUTE!!!

As with every baby we rescue, we are sooooo happy to see Jesse doing so well and getting the love and care he so deserves!!! Oh and yes he is related to Tully in one of the earlier posts...not sure how but they came during the same rescue.... 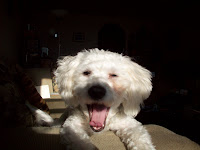 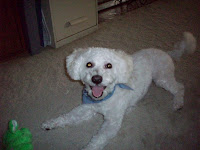 Stu finally made it on the transport headed north from South Carolina and into his forever home! He had a case of kennel cough but his new family waited patiently on him. His new name is Cody and as you can see he is being smothered with the love he deserves. Justin and Amanda are sure to make everyday a wonderful day for Cody! He is even pretty much housetrained after only a couple of days and also gets along well with their other dog Maggie.

Yet another GROWLKID happy and loved the way all furkids should be!!! 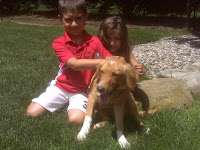 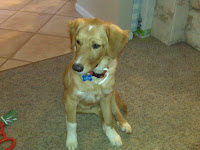 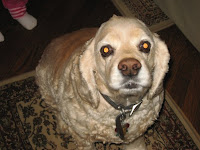 This blog post is in memory of a Honorary GROWLKID, Max. Max crossed over to the Rainbow Bridge 07/01/09. Max was a great little cocker spaniel that I met just a couple of months ago in New Jersey. His family was a little concerned that Max was starting to get a little temper and wasn't acting like himself. With a new baby coming along, and another little one in the house they really were having to think on the basis of the family, but yet really didn't want to give up on Max. They were referred to GROWL by our foster Stacy that knew them well and also knew that I have a strong weakness for cockers. We talked for awhile at Stacys and I spoke to them about cockers and the fact that Max had grown up as a puppy with them, and for all of these years and never had a issue and it really made no sense to me. We spoke about it being a medical issue with Max and maybe he was trying to tell us something was wrong but well, can't really say it and he just didnt feel good when he was having his "cockertude". For some strange reason when I was there with Max and talking to them it just seemed like the answer. A week or so after I got a message from Angie that it was a pulled muscle in Max's back and he was much better and things were going great! Of course this made me very happy as Max and his family loved each other and it was very apparent!!!

I am very happy that Max was able to stay his final months with Angie and John and they were there for him until the end. I feel very honored to have met this awesome couple and Max, they never gave up on him and I admire that so very much!!

You are loved and missed Max.... 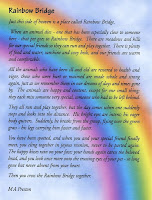 "Little" Miss Lucy was rescued in June of 2008 from South Carolina. Lucy made her way up north via GROWL transport and soon found her furever home in Brooklyn, New York! Casey sent me these updated pictures of Lucy today and man oh man I am grinning from ear to ear! This "Little" girl has grown into such a BEAUTY!!! As you can see she is so very happy!

Her mommy Casey says this about Lucy....

Hi Dawn!
I just wanted to check in and share with you how happy we have been this last year with Lucy (formerly Izze from Mauldin SC) We got her June 4th 2008. Our lives have changed drastically for the better! She is a happy Brooklyn puppy that get about 4-6 miles a day as well as lots and lots of fetch! She is even making friends with just about every dog she meets! Thank you again for all you girls do. I attached her pet-finder pic as well as a couple updates of her running and playing in the dog park! 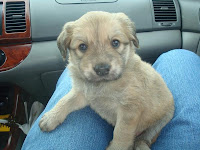 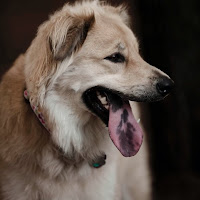 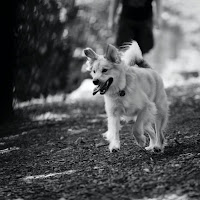 Mathew is a cocker spaniel found in the Bronx and the ASPCA in New York was called in to handle his case. Matty, as we now call him, was a little "territorial" with his toys and treats. We stepped in at the request of the ASPCA and Matty is now a GROWLKID. At the moment Matty is in South Carolina with Dawn and doing alot better. He shares his toys now and food as well and he is wanting to be loved on 24/7.

Enjoy the video and look at how great Matty looks now compared to when Annemarie got the call to rescue him!


Thanks Annemarie!!! Keep up the great work and GROWL will always help when we can!!! 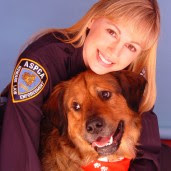 Little update on our "Spokesman" Vinny who is now named James....

Lisa and Brian sent us this updated picture today and as you can see James has literally made himself at home. Here is a little bit of what Lisa says about this great boy....

He is a great dog! He gets along with the cats and all the craziness of the house. He is fun to have, he does very "Jack" things, like jumping up on the
kitchen counter, but it's funny to just see him sitting up there with a
"I didn't do it" look, I just could eat him up!!. 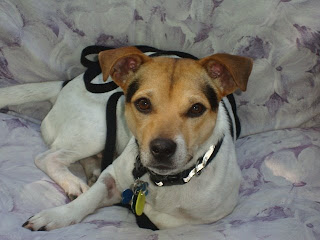 Cute little Nikita has found her furever home in New Jersey. Nikita hitched a ride from South Carolina in hopes of finding the love she deserved. She was lucky enough to come across a family looking to adopt a baby in need. Kerrie and Tom came and met Nikita and it was a match. Now she lives at home with them and also her fur-sister Adira. Kerrie also told us when they go on walks Nikita gets a little upset and whines when people dont come over and talk to her, confident little girl she is! I think Nikita will be quite the diva it seems and we wish Tom and Kerrie the best with their GROWLKID Nikita!!! 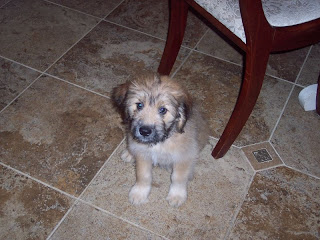 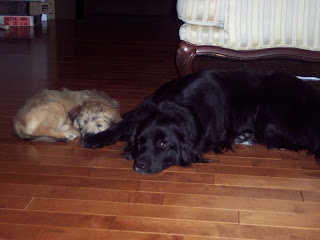